How many students does it take to make a windmill? 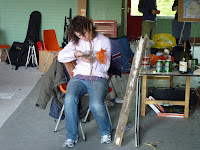 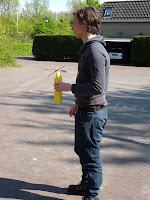 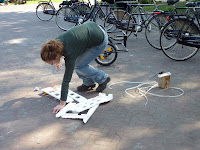 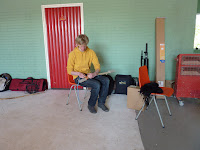 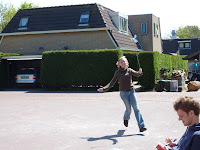 (Apparently quite a few.)

As sparkingly as Thursday ended and Friday began, quite so confusing was the rest of the Friday afternoon. The students threw themselves on making windmills with materials they found on the beach and dead branches from the surrounding bushes. The teachers and researchers stood wonderingly by as a lot of energy and focus was given to producing windmills of all shapes, sizes and materials. It completely transformed the fire station from a 'home base' into a workshop. Of course, this is what happens with laboratories: they are for trying things out.


As Horst Rickels would remark that evening and also the following day: sometimes this kind of creative stagnation is needed in order to contemplate where to go next. It was up to him and Elvira to make sure that the group would come back to their concepts of what to do on the island, and why, and how. A few main projects came out of the reflective talk on Friday morning:


1) The bunker - The bunker Wassermann was built on the highest point of the island during the second world war. It was never used for war purposes but still its inherent meaning was that of war, agression, suffering. The students wanted to change this.


2) Vredenhof - The peaceful cemetery near the bunker holds the graves of many (young) men who died during the first and second world war. Many of the graves do not have names on them but say something like 'inconnu' or 'known unto God'. The students thought it would be appropriate to give these men an identity somehow.


3) The path between the bunker and Vredenhof - How to connect those two places? The idea of a procession was forming.


4) The dunes - The natural environment of the island does not only provide many points of beauty but also acoustic opportunities. The dune bowl that was originally envisaged as a project location was abandoned because swallows were nesting there. A new location was found near the village.

5) The Wad - From mud we are born and to mud we will return. This was the basic idea behind a short performance piece in the muddy Wad to the south of the island.