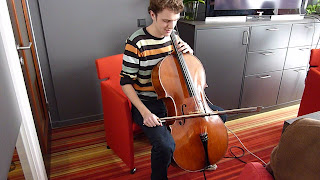 Hereby the link to the musical theme by René van Munster, based on the sound of Schiermonnikoog sand in a little bag.
Link to YouTube: http://www.youtube.com/watch?v=q5E7-c9uxNc
Posted by Ninja Kors at 05:37 No comments: 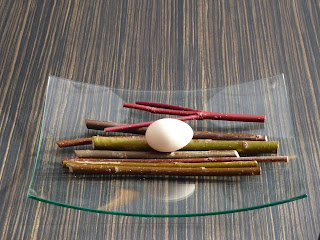 It has been a long time between posts. There has been much a-working behind the scenes. More posts are to be expected from this point on though because the work with the students has begun. There was a kick-off meeting in January which was mainly informational, and the first creative session with the students in Groningen. This took place March 6, 2010. The meeting was held in the director's room in the Prins Claus Conservatoire (thank you Chris Fictoor for the use of your room!) and took up all of the afternoon.
During the kick-off meeting in January, the students had all been given a small bag of sand from the island. I collected it myself on the freezing beach back in December. The students were asked to give this little bit of Schiermonnikoog a place in their own world, and report on that in whatever way they saw fit: image, sound, words, etc.

The Groningen students reported back on March 6 and we were pleasantly surprised by what they had done with the sand. One student had put the sand under the carpet of her new home. Another one had included it in an assignment at the Minerva Academy. One had given it back to the water and the wind and had recorded this with photos and a short piece of prose. Yet another had taken the sound of the sand in the plastic bag as a starting point for a musical improvisation on his cello. (Video to be included later.)
[Picture left: Jos Volkers. Picture right: work by Bram Terra.] 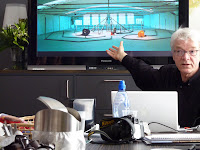 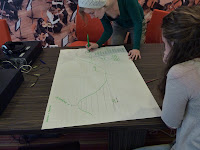 cross-arts work to the students. In turn, the students were asked to develop some first ideas about what, why and how to do things on Schiermonnikoog in May. These ideas will be brought to the final preparatory meeting in April where we will try some of them hands-on in one of the studios in The Hague.

At the end of the meeting the students received yet another assignment. Elvira Wersche gave them three short sticks from her own garden. The students are to discover the possibilities and meanings inherent in the sticks: past, present and future. Just like an egg, she explained, everything has more and deeper layers than can be observed at first sight. One may consider an egg as an oval calcium structure, or as a potential for new life. It is perception shifts like these that enable an artist to make connections and meanings that transcend sound or image - and that bring together the various arts disciplines. 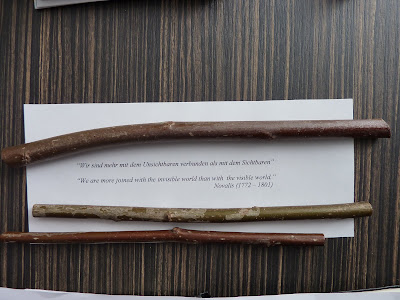