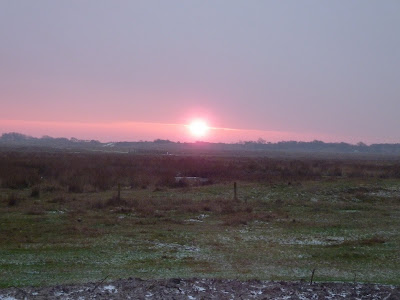 Although the island of Schiermonnikoog is very small, it is still large enough to require a bicycle for getting around. Rineke our guide set a course for us and we set out to explore: West and East, North and South.
Light and dark.
Concrete and sand.
Life and death. It’s all there.

There is an old bunker in the middle of the island. It was built by German forces during the second world war to establish a communication hub by means of a 40 metres high antenna. The device never made It there, probably because of sabotage. The bunker is still there, a grey concrete beetle sitting at a strategic high point. It now offers unrivalled views of the island and the surrounding waters. 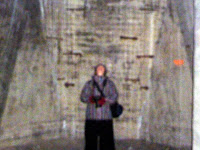 That is all very well and for explorers like us, band of cross-arts scouts, it is always good to survey the surroundings, but common wisdom dictates that the treasure lies within. We found the entrance to the bunker and roamed around in its small chambers, marvelling at the way that a little light found its way in and the sounds of the spaces and materials within. A boy’s adventure book come true!

More stuff for the imagination was found not far from the bunker. There is a small graveyard there for people (mostly men) washed up on Schiermonnikoog’s shores. Some are very old graves from the early twentieth century when identification of bodies was not so advanced as it is now. Most of the graves however are from the wars.

Shipwrecked anonymous men lie side by side with unknown soldiers from European nations like England, Germany, France, Poland. Not all are unnamed and plaques show the deaths of young men: some made it to their thirties but so many did not. Twenty-three, twenty, as young as eighteen years old they were shot down in their planes and their remains made it to this beautiful tranquil place on this strange island. Brushing aside the snow from the plaques it made me realise all the things that these young men, boys, had never known.

We biked to the beach, with snowy sand and sandy snow. We biked through the dunes to where the ‘kwelders’ begin, a beautiful watery ecosystem that stretches as far as the eye can see. We biked along the ‘Waddenzee’ to the southern tip of the island and watched the ferry landing place in the distance. (The following morning the snow decided to take things seriously and positively flood the north of the Netherlands. We were lucky to get home. The views, however, were beautiful as we made a last stop before departure, at the little catholic church on the island.) 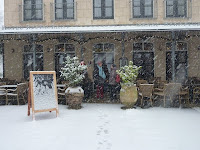 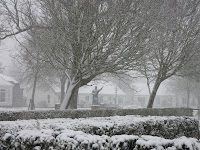 Above all, we biked our hearts and souls around this beautiful place between the land and the sea and little bubbles of inspiration and imagination were constantly renewed. This is going to be a great project!
We're meeting the students in January. So far I have received the names of most of them and also many short biographies of who they are and what they (want to) do. It is going to be an interesting group. I am looking forward to what they will come up with. :)
Posted by Ninja Kors at 01:30 No comments: 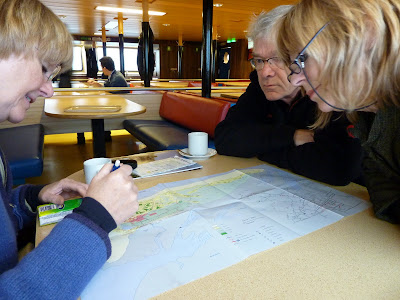 The pilot project will take place in Schiermonnikoog, a small island to the North of the Netherlands. This week we (me, Rineke, Horst, Elvira) visited this beautiful place to scout for places that could play a role in the project in May. I had never been to the island but I had heard a great deal about it. However, being from the west of the country and no stranger to beaches myself, I did have a mental image of what I supposed it would be: sea culture, seagulls, fisherman culture, sand.
It turned out to be different but that was no fault of the island itself; it was due to the weather. We had snow!

This week was the first really wintery week of the year in the Netherlands. And the winter hit strongest in the North of the country: in the area of Groningen, Friesland, and therefore also Schiermonnikoog. It started to snow just before we got on board of the ferry to take us across the Waddenzee. It was still snowing when we got off on the other side. The landscape was covered in white powdery snow, bringing with it that magical quality that only snow can bring. 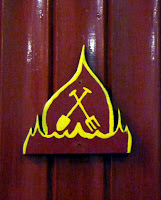 The day started with an appointment to see the old fire station. This building is no longer in use for this purpose. It is now envisaged as part of a beautiful cultural centre that is planned to open in 2011, linking several existing buildings as well as new structures. As it is now, the fire station is only in use occasionally by islanders preparing for, for example, the midwinter festival.

The fire station was wonderful! It is exactly what we would need for the project: it has a large central space that opens up (by means of those typical garage doors) to the village. It has separate rooms for students and groups to work in. It has sanitary facilities and it has even a kitchen! It is absolutely perfect. Hopefully we will be able to use it in May. 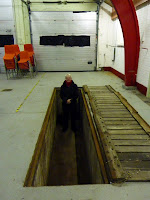 (In the floor of the main space there is a pit, for greasing the engines and boat maintenance. Horst couldn’t control himself: he had to get in. So here he is.)

With Rineke as our guide we walked past the lighthouse and to the dunes to find a natural sandy amphitheatre. With the snow on the dunes and the grey skies around us it was beautiful. The sea can be heard all the time, a soft roar at the edge of hearing that reminds me city dweller of a motorway. Yet the sound of the sea is different; it has a depth and continuity to it that car tires just cannot manage.

The nice thing about being in an inspiring place, especially with artists like Horst and Elvira, is that upon seeing something like that sandy dune amphitheatre one immediately sees a multitude of possibilities for using that space for artistic work. We could see Horst thinking about the acoustic possibilities of the high edges, while Elvira took photos of the textures and materials around. On the way back to the village, the ideas and philosophies were already flying back and forth. And this was only before lunch… 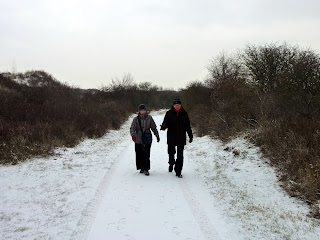 (More about our visit to Schiermonnikoog soon!)
Posted by Ninja Kors at 04:57 No comments: 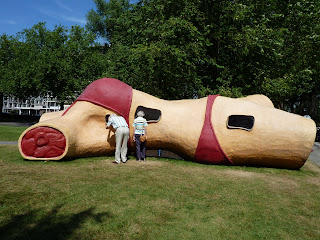 Rineke Smilde, lector Lifelong Learning in Music and the Arts (www.lifelonglearninginmusic.org), has asked me to dive into cross-arts work. Not on my own but together with artist Horst Rickels. This is just as well because he is very experienced in this field – and I am not. At all. I enjoy being surprised and delighted by works of arts, and I enjoy the high level of ‘experiencing’ that Horst includes in a lot of his work: sound, movement, use of space. His works seem very tangible to me and I like that.

However, other than enjoy his work, I can’t say that I fully understand it. Nor do I know how it came into being. Not yet! Now Horst and I are undertaking an endeavour to explore what some of the elements (or factors, or circumstances, or…) are that make cross-arts practice both fascinating and useful for every kind of artist to experience.

One of the reasons we are doing this is because as we go we will be developing a cross-arts laboratory for young artists(-to-be): students of music and visual arts. The framework for the lab has already been set in time: preparations have started for an intensive in May with around fourteen students and three artists/coaches/guides.

My primary job is to coordinate, observe, interview. However, I fully intend to this take opportunity to find some ways to ‘see different things or see things differently’, as Horst describes one of the key elements of cross-arts practice and being an artist in the world. While I am neither artist nor musician, I am very much in this world! I don’t sing or compose about it, or paint or make installations: I write.

Rule #1 for any author: write what you know.
I want to know more.

Photo: people looking into Bikinibar by Joep van Lieshout. Shot during ArtZuid 2009 in Amsterdam, August 2009.
Posted by Ninja Kors at 01:45 No comments: